Consumers should be vigilant of criminals attempting to use the Arcadia Group being placed into administration and Debenhams being liquidated as an opportunity to trick people into revealing personal or financial information.

Criminals will often use the publicity around these sorts of events as a chance to pose as a genuine organisation, including banks, police officers and retailers. Often the criminal will pretend to be from the impacted company, such as retailers which are part of the Arcadia Group and Debenhams, or claim they are dealing with an issue resulting from the collapse.

Using the Arcadia Group and Debenhams as a cover story, the criminal will then attempt to get the recipient to disclose personal or financial information, which they will then use for their own fraudulent purposes.

Consumers are urged to follow the advice of the Take Five to Stop Fraud campaign: 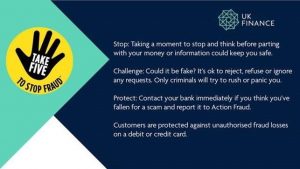 Summary: You’re convinced to move your money into a fictitious fund or to pay for what later turns out to be a fake investment. You...
Read more

Summary: If you are thinking of buying tickets to a live event remember to look out for the signs of ticket fraud and follow the Ta...
Read more

Summary: From fake caravan or motorhome listings to “too good to be true” offers for holidays, villa rentals and holiday lets...
Read more

Summary: Business owners and senior managers are often unaware of the fraud risks that can affect them. The impact of fraud and sc...
Read more

Summary: We want organisations, businesses and individuals to be able to spread the message and get involved in the campaign so...
Read more

Scam warning: Criminals may purport to be from Take Five, using our official branding on websites, social media posts, literature, on the phone or by text. Take Five doesn’t provide endorsement or approval for any products/services and would never call or text anyone.